Born in 1909 in the wave head (Bob Haircut) has been one hundred years of history, this hairstyle with course of the liberation of women, have been controversial, but eventually become classic.

Bob is a generic term for hair length, refers to the length of hair on the ears, shoulders above. "There is always a wave for you", whether it is in the T stage, or in daily life, Bob became ever lasting fashion vane.

Bobo nets named borrowed Bob title, in the upcoming opening of Bobo nets, we prepared this article, to share with you a hundred years history of classical style.

Although, some 'women dare to be the first' before the first World War, has begun to try to cut short hair. But it was not until the war, those who work in the war of the girls really helped disseminate short hair, because they feel that the inconvenience brought to work long.

Bob style wigs is a changeable shape, after a hundred years of evolution, from the hair length, thickness and so on, through a series of self evolution. The changes in each tiny, brings a new feel. Bob is the most wonderful place is, no matter what kind of face, it had a way. Both classical style and modern style Bob, Bob, there is always a way to meet the personalized needs of different people. 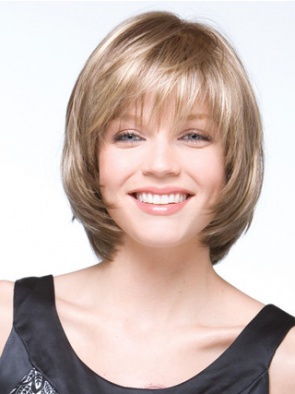 The younger daughter of Tom Curise and miss Su Rui, to the elderly due to play the queen won the best actress Oscar Helen Milen, from the bold faction actress such as Vitoria, Beckham and Agnes Dean, to the subtle faction actress as Tom's Katie Holmes and Umma Thurman -- the whole eight pole not to go to the people, recently it frequently in European and American fashion magazines in the collective appearance. There is only one reason: they cut a named "Bob" (BobHaircut)! Born in 1909, was regarded as "not serious woman such hair" Bob, through the vicissitudes of a century, never left the line of sight of people. Love and innovation generation after generation of major suit star and actor of hair, let the wave head is always in the forefront of fashion. In 2009, Bob upsurge stage a comeback, want to become the trend Master?

Nowdays,it is very popular among young girls,bob wigs has become more and more usual in our dailylife.So,try a short bob wig is your best choice!